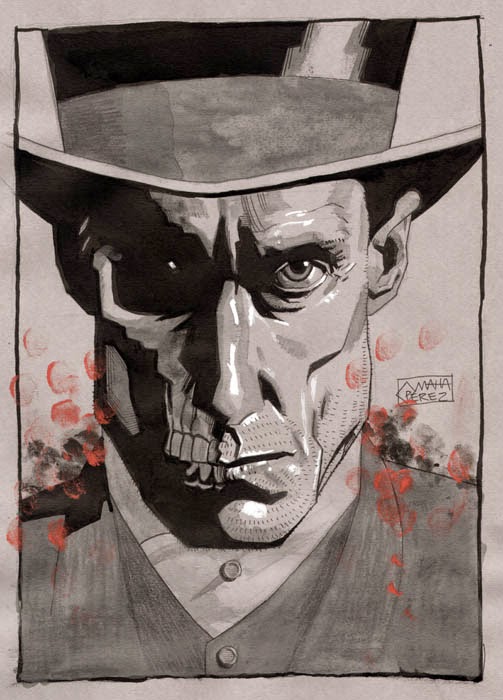 Omaha Perez is the writer and artist of the graphic novels "Bodhisattva", "The Drude" (which should be out later this year) and "Holmes". He has been recognized by the Society of Illustrators New York, the Society of Illustrators Los Angeles, Spectrum, and 3 x 3 Magazine’s annual juried illustration book.   He also owns and operates the Los Angeles design studio Drude Studios - facebook.com/DrudeStudios. Currently he is working on "Holmes 2".

I contacted Omaha after reading "Holmes" as it was a different take on Conan Doyle mythos. It was a Holmes mystery with a touch of Hunter S. Thompson's "Fear & Loathing..." thrown in.  I found it very entertaining and am looking forward to the sequel.  This piece is actually a take on one of the covers from the series.  I was floored when it arrived as it is really a stunning piece.
Posted by Unknown at 12:07 PM No comments: 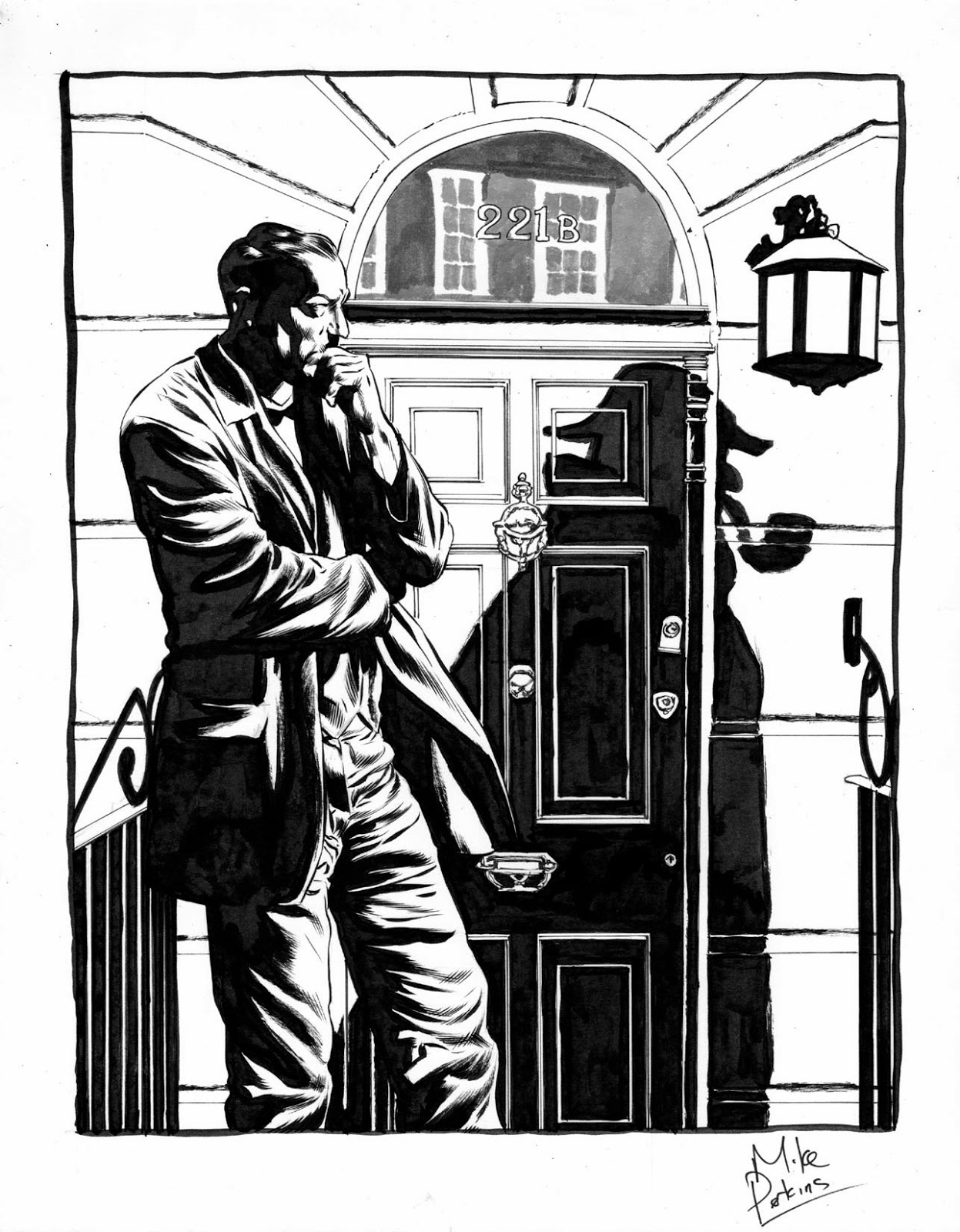 Mike Perkins is a wonderful British artist best known for his work on Captain America, Ruse, and more recently the Marvel adaption of Stephen King's The Stand.  "Ruse" with it's Victorian detective feel and Mike's artwork is one of my favourite comics...very Sherlock Holmes-ish, with a mix of action, adventure and fantasy.  Currently he is working on the relaunched "Deathlok" series for Marvel.

I met Mike at a local comic convention here in Toronto a number of years ago and arranged this commission with him.  The main character in "Ruse", Simon Archard, is a Victorian detective, so I was hoping he'd be interested in doing a commission of Holmes for me. He was excited to do it but wanted to take his time with this piece.  Instead of doing it at the show he took it home with him and worked on it between jobs over the next little while.  It may have taken a while to finish the piece, but it is amazing and was well worth the wait.

Posted by Unknown at 5:33 PM No comments: 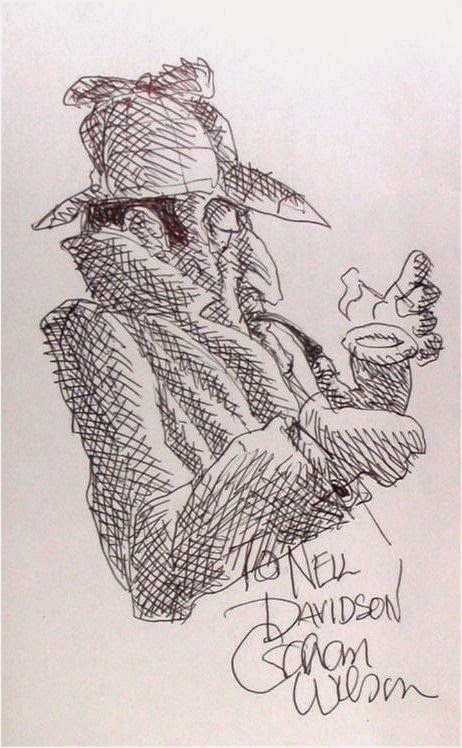 Gahan Wilson is an author, cartoonist and illustrator best known for his horror-fantasy cartoon style. Many of his cartoons have been featured in Playboy, The New Yorker and Collier's over the last 50 years, as well as his own book collections. Among the many awards he has received over the years, in 2005 he was recognized with a Lifetime Achievement from the World Fantasy Awards and the National Cartoonists Society's Milton Caniff Lifetime Achievement Award. More recently, he was the subject of the documentary "Gahan Wilson: Born Dead, Still Weird".

I have been a fan of his work since I first picked up a copy of "I Paint What I See" years ago at a used book store. The single page cartoons were hilarious and I loved the style of his artwork.
Mr. Wilson was kind enough to do this drawing of Sherlock Holmes for me a few years ago and I could not have been more honoured. He has drawn Holmes for a number of his cartoons, but receiving an original drawing from him was a thrill of a lifetime.

Posted by Unknown at 1:07 PM No comments: 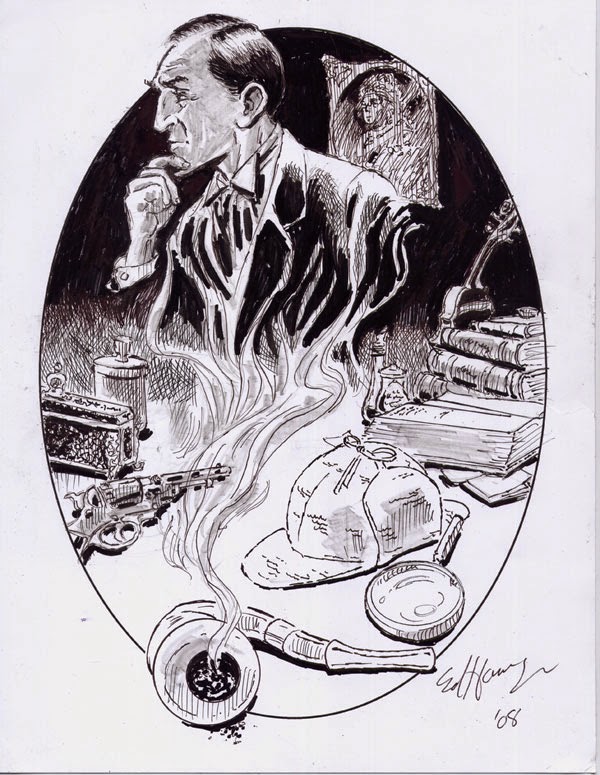 Ed Hannigan is a very talented artist, writer and editor working in the comic industry since the mid 70's.

Over the years he has worked for both Marvel and DC working on titles such as "The Defenders", "The Spectacular Spider-Man" and "Green Arrow".  He helped create the characters Cloak and Dagger at Marvel, redesigned Braniac in the Superman comics, and did some amazing covers for Batman in the early\mid 80's.

The covers he did for Batman are among my all time favourites which is why I originally contacted him.  We emailed back and forth and I arranged to have him do a Sherlock commission for me.  The above picture does not do the piece justice as it is stunning.  All the little details I loved about his Batman covers, he did for this piece as well - the books, violin, painting, etc...  It's all these little things that really make this piece pop and one of my favourites.
If interested, he still does commissions.  You can check out his webpage at
http://home.myfairpoint.net/hannigan7/
Posted by Unknown at 2:04 PM No comments: 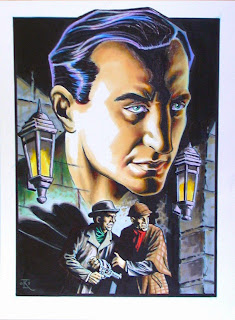 Kent is a wonderful Canadian artist I have been a fan of for years.
His love of the comic and fantasy genres led him into the comic and role-playing game industries. Working with Malibu Comics, he created a series of "Planet of the Apes" comic books, as well as a series called "The Adventurers". His artwork can also be found in many role playing games by Fasa, Steve Jackson, White Wolf, and Anvil Galaxy and Rifts for Palladium Books. Lastly, but cetainly not least, Kent is also Max the Mutt’s Coordinator for the Illustration for Sequential Arts Diploma Program helping to teach a new generation of Canadian artists.
I commissioned the above piece from him back in 2008. It is a great piece based on the old Basil Rathbone/Nigel Bruce movie series from the 30's and 40's. Check out his website to see some of his woderful commissioned pieces of comic book hero and vilians, movie characters and stunning native people series. If you are interested, send him an email to find out about your own commissioned piece - www.kentburles.ca
Posted by Unknown at 10:24 AM No comments: 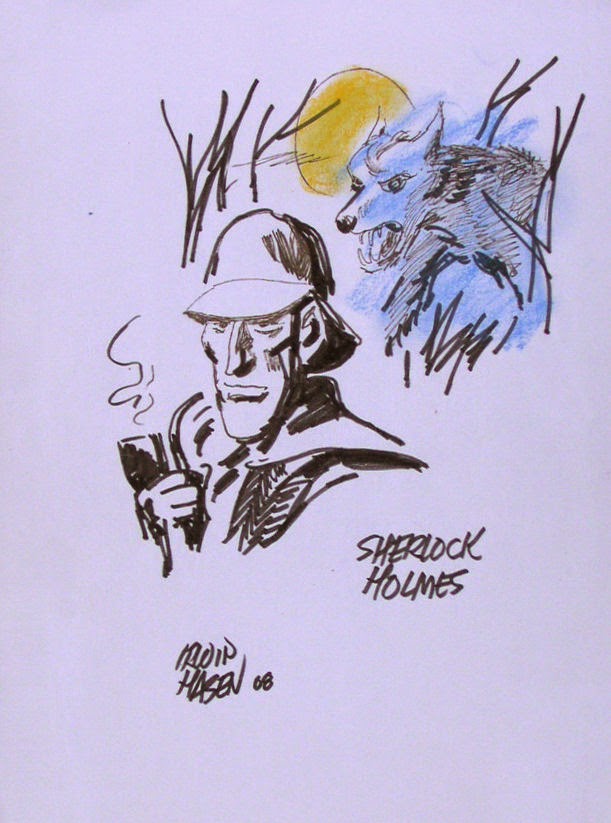 Irwin Hasen recently passed away at the age of 96.  He was one of the great artists of the Golden Age, and one of the last of the DC artists from that era.
While best known as a co-creator of the comic strip Dondi in the mid 1950's, he also worked in the comicbook industry both before and after the war. At DC he worked on many of the main titles including The Justice Society of America, Green Lantern and the Flash, and created the character Wildcat.
I had the pleasure of speaking with him a few times over the phone and he was a wonderful man with many great stories.  Above is a drawing of Sherlock he did for me a few years back at the age of 90.  He had never done Holmes before and mixed in the Hound to represent his favourite story.
Posted by Unknown at 1:50 PM No comments: 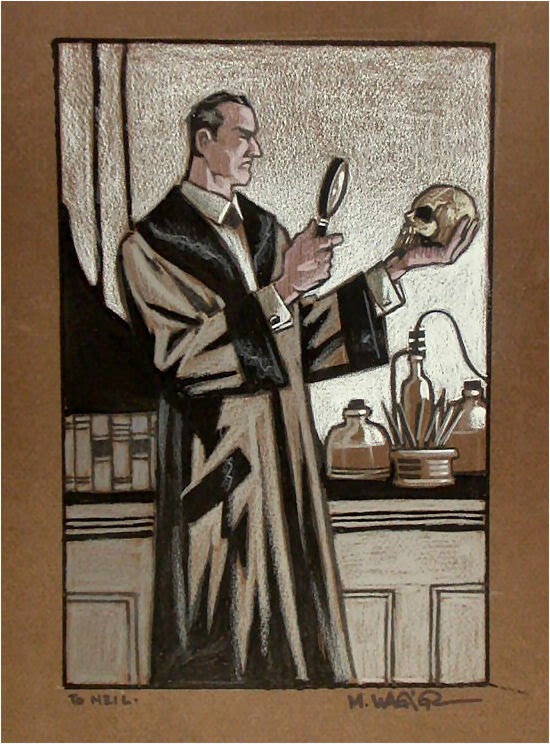 In addition to Matt Wagner creating the wonderful comic book series "Mage" and "Grendel", he is also an amazing artist.  He has also worked on a number of other iconic characters like Batman, Green Lantern, The Shadow and The Green Hornet.

With luck being on my side, I got in touch with Mr. Wagner just before he was scheduled to appear at a show here in Toronto AND just as he was about re-read the Doyle stories.  So he was gracious enough to do this great Sherlock piece for me.  It is pencil crayon on coloured paper and the finished piece looks wonderful.  I really love the look to the piece and the fact that it picks on up on a different side of the character.
Posted by Unknown at 1:39 PM No comments:

Mr. Rubinstein started his comic career back in the 70's.  Working primarily as an inker, he has worked for all the major comic comparies - Marvel, DC and later Dark Horse - and has worked on every character you can think of.  He has had extended runs on Spider-Man, Aquaman and on the Official Handbook of the Marvel Universe series.  According to Wikipedia, he has inked over 2,500 comics over his career to date.

Mr. Rubinstein actually contacted me as he saw a piece Dave Ross did for me in my comicartfans gallery.  He has worked a fair bit with Dave over the years and was curious to know if I wanted it inked.  Instead I commissioned a piece from him and he did this stunning portrait of Basil Rathbone for me.  It's in charcoal and the scan does not do it justice.  It is a dead on likeness of the great actor and is just superb.
If you are interested in finding out about a commission from him check out the following links:

Posted by Unknown at 2:14 PM No comments:

Al Feldstein is best know for his work with EC Comics dating back to the late 40's.  Starting as an artist, he also wrote stories for many of the EC titles including "Weird Science", "Crime SuspenStories", "The Vault of Horror" and of course "Tales from the Crypt".  Eventually he focused on writing and editing the EC titles and saved his artwork for covers. In 1956, he took over as the editor of "Mad" magazine and continued in that role until the mid 80's.  Since then he has focused his talents on painting landscape and wildlife, and was inducted into the Will Eisner Comics Hall of Fame in 2003.

I'm a huge fan of the horror genre, especially of the 50's EC comics and "Tales from the Crypt".  So getting the chance to get a drawing of the Crypt-Keeper as Holmes by his creator was a no-brainer.  The Crypt-Keeper first appeared in an issue of "Crime Patrol" written and drawn by Mr. Feldstein, before the title changed over to "Tales from the Crypt" a few issues later.  Mr. Feldstein did a great job and it was a honour to talk with him when setting up this commission.

Posted by Unknown at 3:49 PM No comments: 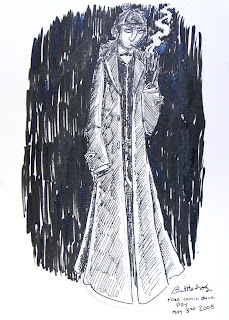 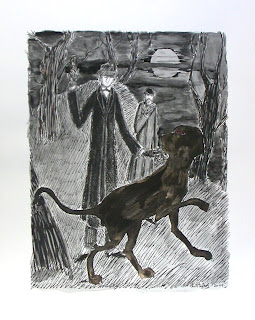 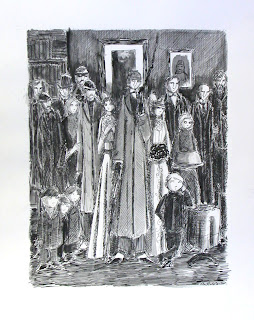 Bret Herholz is an illustrator, scriptwriter and art instructor in Massachusetts. He's written and drawn a number of different books including "Diary of the Black Widow", his latest "Memento Mori" written by his wife Sydney, and my favourite "Sherlock Holmes: The Painful Predicament of Alice Faulkner" (adapted from William Gillette's play).  He's also been a contributing artist for the web series "Cracked: After Hours".

I actually came across Bret's work on eBay a few years ago.  His Edward Gorey-esq style really caught my eye.  While I lost out on the first auction, I did manage to win this great rendition of the classic Sherlock along with a copy of his book.  We emailed back and forth a little and I commissioned him for the second and third pieces above.  "The Hound" is based on a Sydney Paget illustration and Bret did a simply amazing job.  The eerie-ness of the piece is wonderful and I love the red eyes on the hound.  For "The Cast" piece, I was interested in getting something with not just Holmes and Watson, but with a couple of the other characters like Prof. Moriarty and Irene Adler.  Bret ended up doing this family portrait style piece featuring many of the major characters from the stories.  I was stunned when I saw the final piece.  He went above and beyond on this one especially with some of the smaller details like needles on the end table, the picture on the wall, etc...

On a side note, Bret does some amazing pieces with other literary characters like Alice (in Wonderland), Winnie the Pooh, etc...  But aside from his Sherlock pieces, his Doctor Who ones are my favourites.  I highly recommend looking him up.